“Do you know that rocks can talk?”

I asked this question when I taught a unit on geology when our two now-adult daughters (one a writer, one a Reconstructionist rabbi) were in fourth grade. They STILL talk about that. I described the three kinds of rocks — sedimentary, igneous and metamorphic — and that the surfaces of rocks — layered, bubbled, swirled; smoothly rounded, grooved or sharp — tell their story.

Why this geology lesson? It’s sparked by Rabbi Toba Spitzer’s amazing book God Is Here: Reimagining the Divine. Rabbi Toba uses multiple metaphors, including water, listening, clouds, fire and rocks, as a framework to help us understand “much about what makes us human” and what is sacred, holy and possibly unexplainable. She says that these metaphors are ways to connect to something bigger than ourselves, a way to perceive the vastness of the world around us, or, dare I say it, to feel or “know” God — or godliness or spirituality — in a deeper and more personally connected way. Do I believe in God? I don’t know … but I do know that I am a small part of something that’s larger than any one of us, and that there’s so much beauty and wonder all around.

I’ve been deeply moved and inspired by Rabbi Toba’s book. While all of the metaphors in the book are amazing — given that I spent almost 40 years as an Earth, space and environmental writer and editor — it’s no surprise that the chapter on rocks got me in my kishkes.

Just before we begin the Amidah on Shabbes morning, we chant the phrase “Tzur Yisrael,” which means “Rock of Israel.” At that point, those of us who can, rise from our seats. “Rock of Israel” is one way to refer to God. Most of us are also familiar with the phrase “Tzur Olamim,” “Rock of Ages” and “Maoz Tzur” (the Hanukkah song), and we’ve been deeply touched by the beautiful song “Tzuri v’Go’ali” (“My Rock and My Redeemer”) taken from the closing of the Amidah.

Rocks are seen as solid, unmoving and hard. “Rock solid” is a common metaphor for something that’s steadfast and permanent. No surprise, then, that “rock” and “stone” are mentioned more than 100 times in the Tanakh. In Genesis, we hear that Jacob uses a stone as a pillow. In Exodus, God puts Moses into the cleft of a rock so Moses will not see God pass; and in Numbers, after Moses strikes a rock twice, God tells him that he will not cross into the promised land. Near the end of the Torah, in his farewell poem (Deuteronomy 32:4), Moses says: “Adonai is the Rock, God’s work is perfect, for all God’s ways are justice.” The beautiful song “Esa Enai” encourages us to look to the mountains for help and guidance because of their powerful and looming presence.

Carl Jung viewed rocks as one of the primordial symbols of eternity, according to Patricia Adams Farmer in “The Numinosity of Rocks.” We carve into tombstones the names of our loved ones as a way to memorialize “for eternity” their presence here on Earth. Rocks are seen as being present before “we” were and are likely to be there after we’re gone. (Well, not always … I have a rock [see photo below] was made for me about 12 years ago by a geologist who scooped up some lava at Kīlauea, cooled it and sent it to me.)] 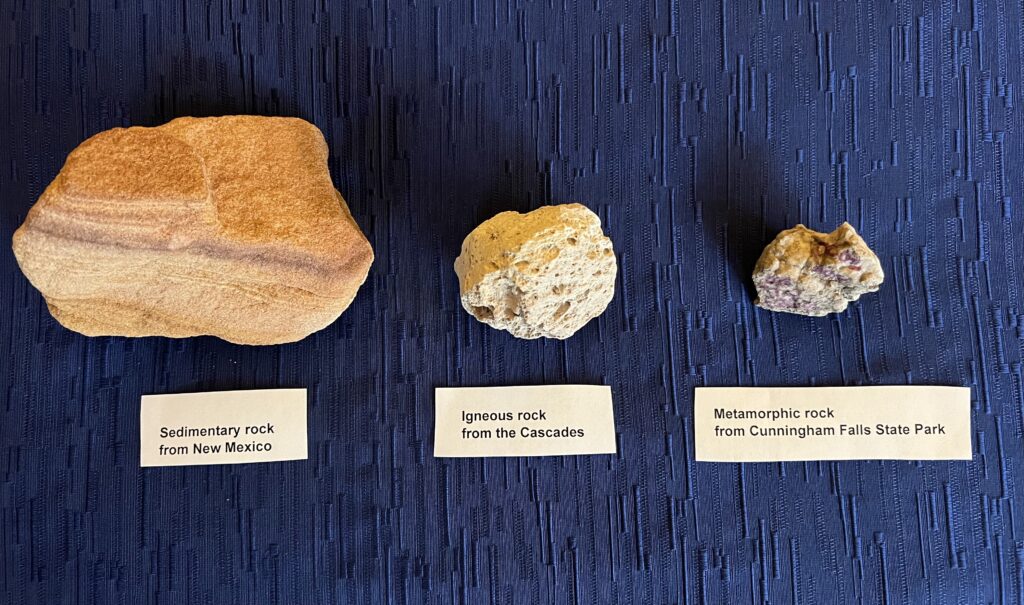 More colloquially, we often refer to something that’s permanent as our bedrock, our steadying force. Many geologists and geophysicists who live in California make it a point to buy homes built on bedrock and not on seismic faults.

Many of us have either witnessed firsthand or seen photos of the majesty of the Grand Canyon, Zion National Park or Great Falls along the Potomac River.

Many of us have driven through a roadcut along a highway — say at Sideling Hill on Route 40 in Maryland on the way to Deep Creek Lake — and we have seen large swoops of rock layers? Or we have seen mountains and landscapes deeply scarred by mining for coal.

We have all seen firsthand what geology teaches us: Rocks actually can be (and are) radically modified over time by strong forces of nature — everything from the inexorably slow but steady trickle of a stream or the raging flow of a river over a waterfall to cataclysmic volcanic eruptions or rockfalls. Rocks are ALSO radically modified by human actions such as what we see in roadcuts or roads carved into mountains.

Reconstructionist Judaism, described by Mordecai Kaplan almost 90 years ago as the “evolving religious civilization of the Jewish people,” teaches us how Judaism evolves over time — and encourages each of us to be active in that evolution. Similarly, we have the ability to evolve in how we see the greater forces around us, how we see holiness, spirituality or even how we see God. Perhaps radically, I assert that, like the natural forces that change mountain ranges, rocks and the shape of our land, each of us continually MODIFIES what we see as sacred, how we see God, how we interact with wonder and the kind of strength that we draw from the beauty of nature around us. What is solid and unmoving for us today may not be so tomorrow. We each have the ability to change our personal bedrock. That’s part of our personal evolution.

And it is up to each of us to recognize what our bedrock actually is.

Like a sedimentary rock, our personal and spiritual God rock may be composed of layer after layer of different life experiences. Some layers are thin, some thick. Some layers are deposited quickly, some extremely slowly.

Like igneous rocks, something explosive may happen to reshape our personal landscape. Or perhaps there’s just a slow but inexorable stream of lava, spilling continuously from a deep source and gradually changing the shape of who we are.

Maybe there are forces deep within us that reshape what you see as steady. Perhaps we went deep underground — say, like during a pandemic or at a time of personal upheaval or illness – and we were transformed. Or perhaps we are part of a measured and steady learning process that changes how we see the world.

Like geological processes, these shifts may be sudden or they may be part of a continuum in our lifespan.

Rocks are part of, and in turn are subject to, geological processes. Likewise, Reconstructionism raises up Process as an essential part of our theology. (You know, one Reconstructionist rabbi asks, “How do you spell GOD?” Her colleague responds, “P-R-O-C-E-S-S.”) It is up to us to be open to evolution, to modify how we see the world, to figure out what is glorious and inspirational and moving, to adjust our personal wisdom to reflect that evolution, to welcome new metaphors and to find joy in the wonder and awe-some-ness of it all.

However we see godliness — and through whatever metaphors for the Divine speak to us at each moment, among them “Tzur,” the “Rock” — may we see anew the awe and wonder that’s all around us and feel that we’re each connected to something that is larger than any one of us.

This is an edited version of a d’var delivered at Adat Shalom Reconstructionist Congregation in Bethesda, Md., on Nov. 12, 2022. 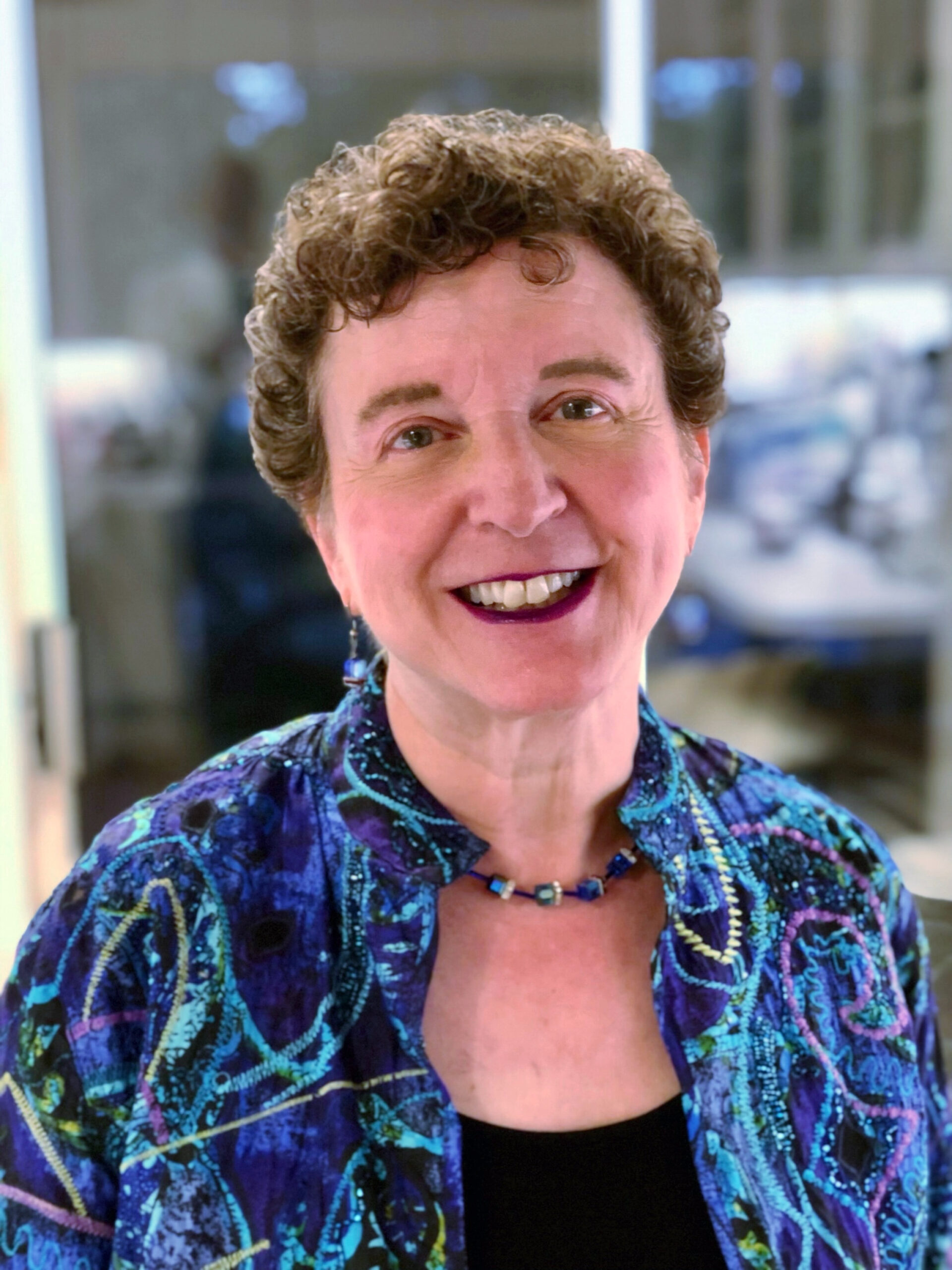